Section 2 combines oral history with data from the archives of ancillary institutions—religious organizations, probation offices, courts, and re-entry centers—to reveal the central role religious groups like the Salvation Army played in the privatization of prisons. As corrections administrators embraced a Christian ideology of rehabilitating the “whole person” in the 1970s, they outsourced key state functions to religious organizations. Though these arrangements began with benign intentions, they changed the economic underpinnings of imprisonment and paved the way for more exploitative private prison ventures.

Chapter 3 discusses the privatization of probation and work release programs to the Salvation Army, emphasizing how innovations such as “offender fees” reshaped the economic incentives of the criminal justice system. Chapter 4 traces the expansion of prison contracting to other religious organizations in the early 1980s. These organizations further transformed the structures of confinement, making them more exploitative, corporate, and institutional.

Section Two demonstrates that punitive motives alone do not explain mass incarceration. Rather, rehabilitative, anti-institutional reforms like halfway houses also played instrumental roles. Scholars have primarily explained mass incarceration as the product of a “punitive turn” and emphasized investments in high-security prisons, longer sentences for drugs, and the War on Crime (Hinton 2016; Gottschalk 2006; Simon 2007). Though these policies contributed to mass incarceration, scholars’ focus on punitive interventions overlooks the extent to which prisons encountered a crisis of social legitimacy in the face of widespread anti-institutional sentiment. In the 1960s and ’70s, religious and secular observers condemned prisons and declared that “the institution of prison probably must end” (Morales v. Schmidt (W.D. Wis. 1972)). In demonstrating how rehabilitative, anti-institutional reforms unintentionally expanded imprisonment and endowed ancillary organizations with a financial stake in confinement, my research provides a more deeply contextualized account of the development of mass incarceration and reveals the role of religious reformers in shaping not only the structures but also the economics of imprisonment. 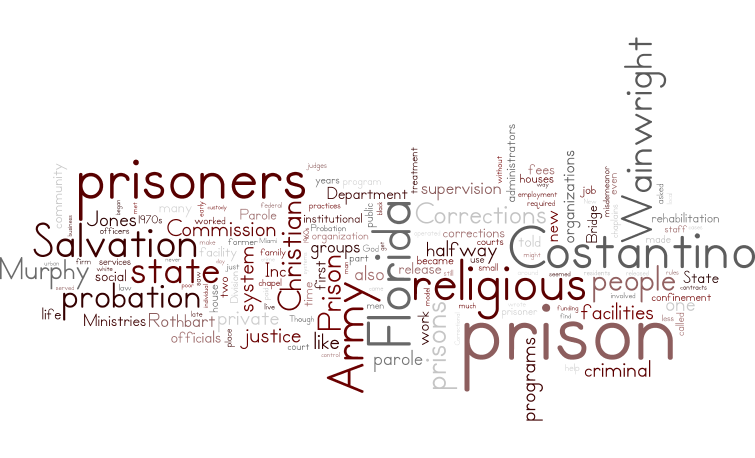