This short digital exhibit is intended to provide a point of entry into the history of Florida’s criminal justice systems. I found these images while conducting research at the State Archives of Florida and other libraries. I’ve written a short, informal caption to contextualize each image. To pause the slide show, simply hover over the image or its caption.

The cartoons included are from The Starke Reality II, a short-lived publication produced and edited by prisoners at Florida State Prison in Starke, Florida. 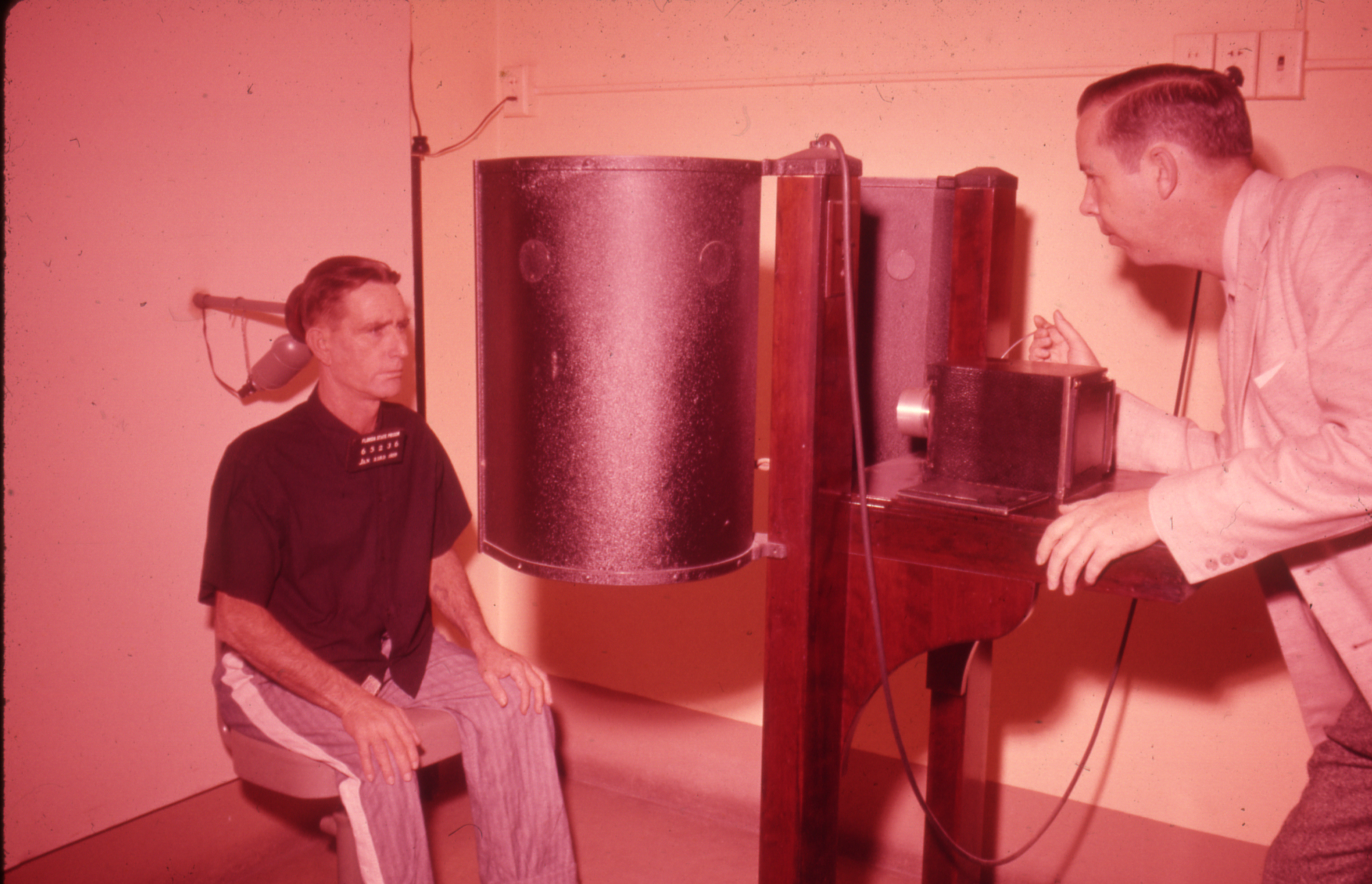 Intake to the Florida Department of Corrections involved strip searches, haircuts, and the donning of a prison uniform. New prisoners also met with doctors, a classification officer, and the institutional chaplain, who informed them about the prison's religious programs and judged their religious disposition. "Good," "Fair," "Poor," and "Superficial" were chaplains' most frequently noted evaluations. This man is sitting for his institutional mug shot in the early 1970s. His prison number is written on the plaque under his chin. 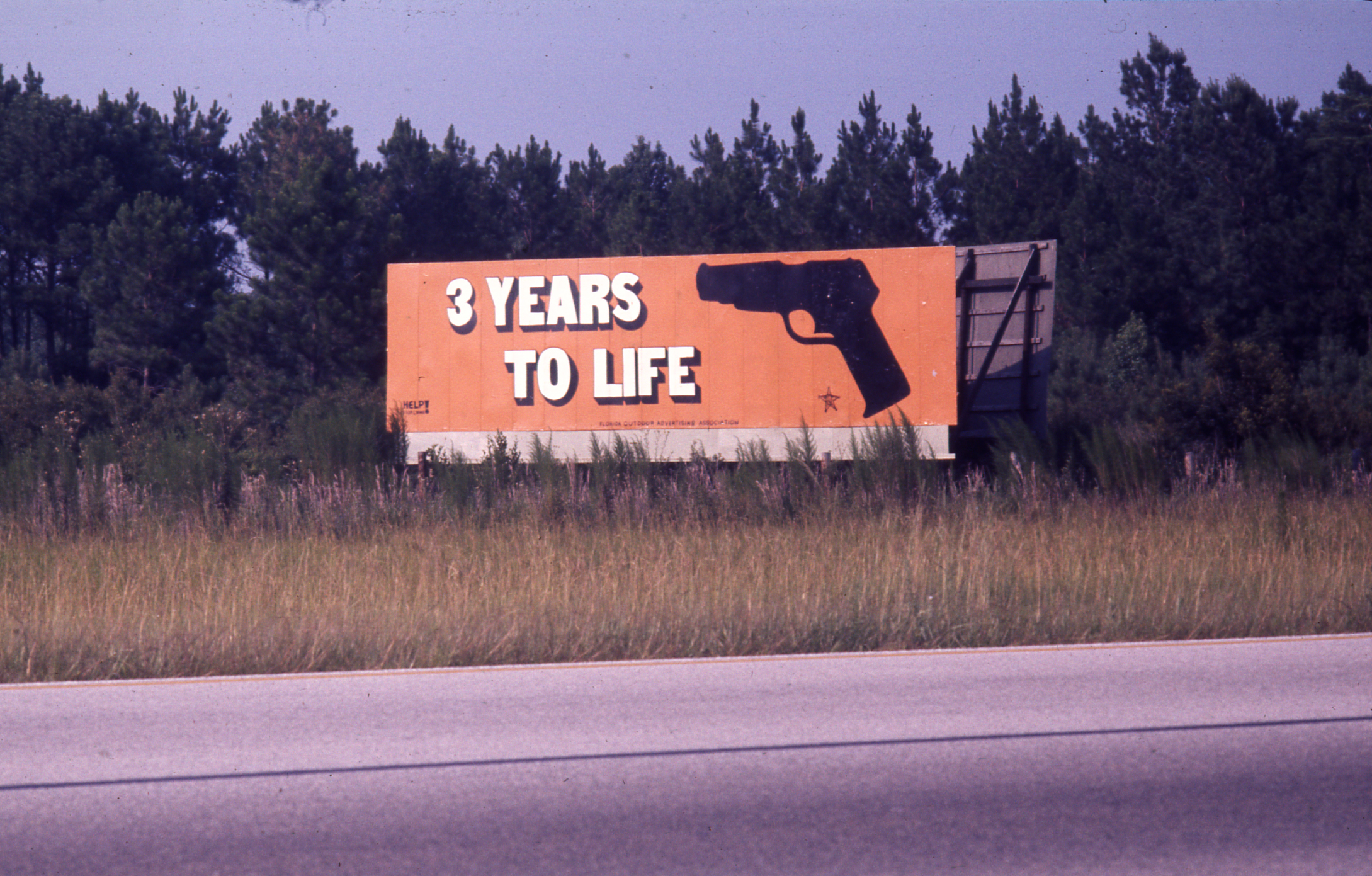 Until the abolition of parole in 1983, most Florida prisoners served indeterminant sentences. Their release from prison depended on favorable action from the parole board. This early 1970s billboard warned motorists that conviction for certain crimes involving guns could result in "3 Years to Life" in prison. In practice, few prisoners served the longest terms permitted under their sentences until after 1983, when the Florida Parole Commission dramatically changed its practices and began holding prisoners for extremely long periods of time. 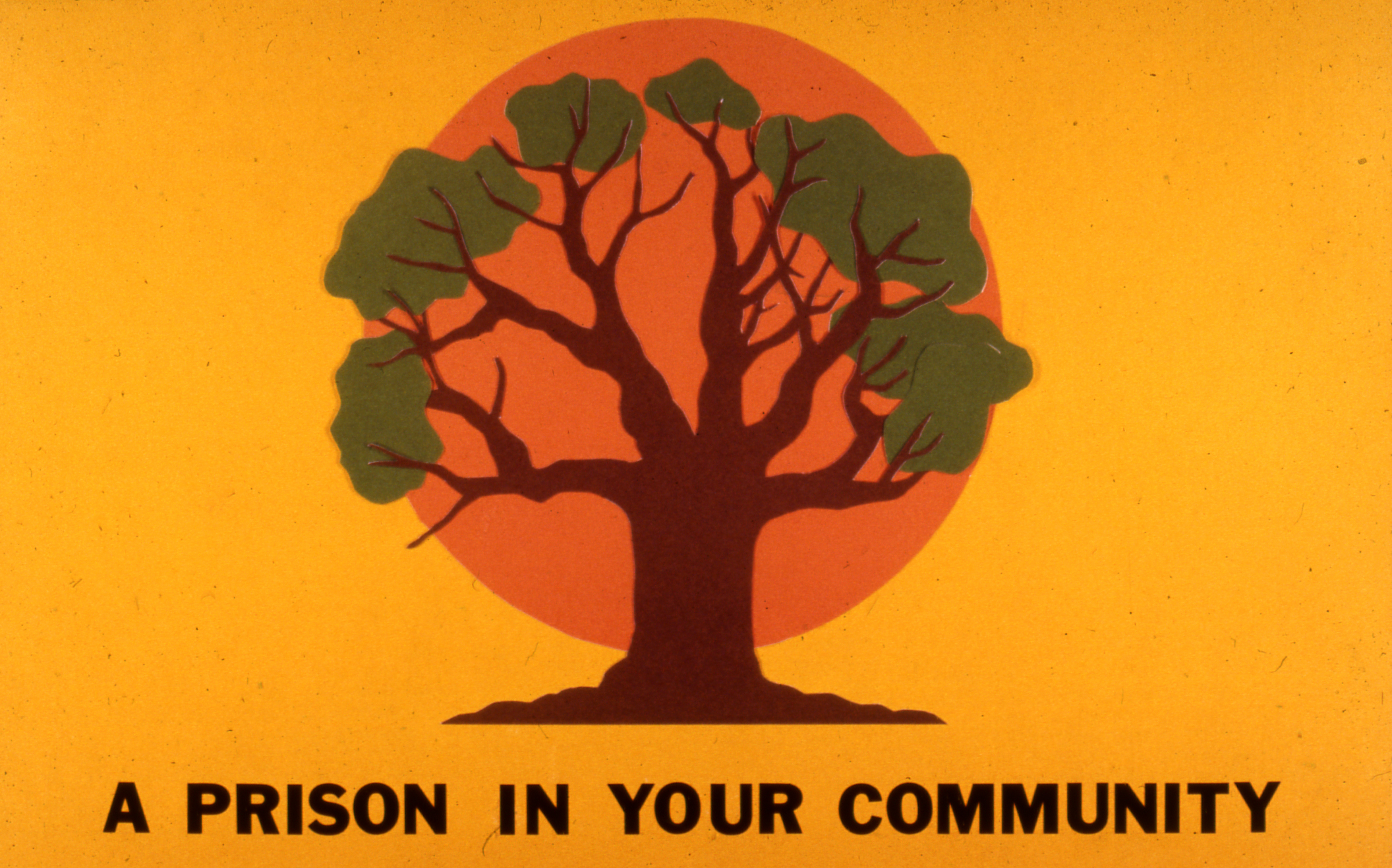 Like corrections agencies around the country, the Florida Department of Corrections embraced halfway houses and "community corrections" facilities in the 1970s and 1980s. This is a slide from a public presentation (ca. 1975) intending to promote community-based corrections. Louie Wainwright, the Secretary of Corrections, told groups opposing "prisons in their communities" that good Christians would accept prisoners as neighbors. Neither the slide nor Wainwright's invocation of religious duty was particularly effective in the face of NIMBY protests. 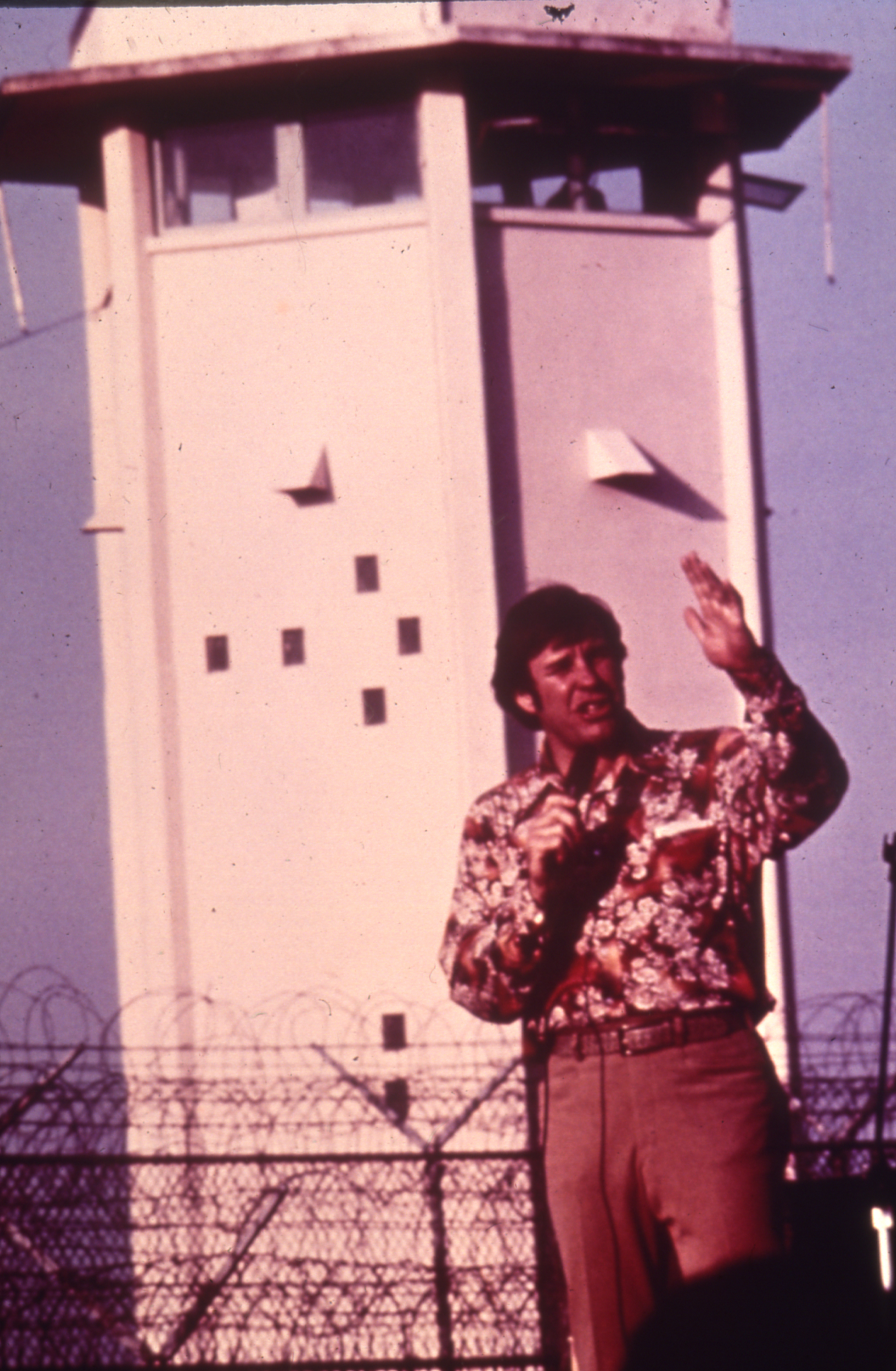 This is a photo of Bill Glass (a linebacker for the Cleveland Browns and prison evangelist) speaking at Florida State Prison in 1973 or 1974. Like most of these photos, it was unmarked in the archives. A former prisoner with whom I conducted several oral history interviews helped me identify the photograph. To indicate that he trusted his audience, Glass would toss his Superbowl ring into the crowd and invite prisoners to take close look at it. 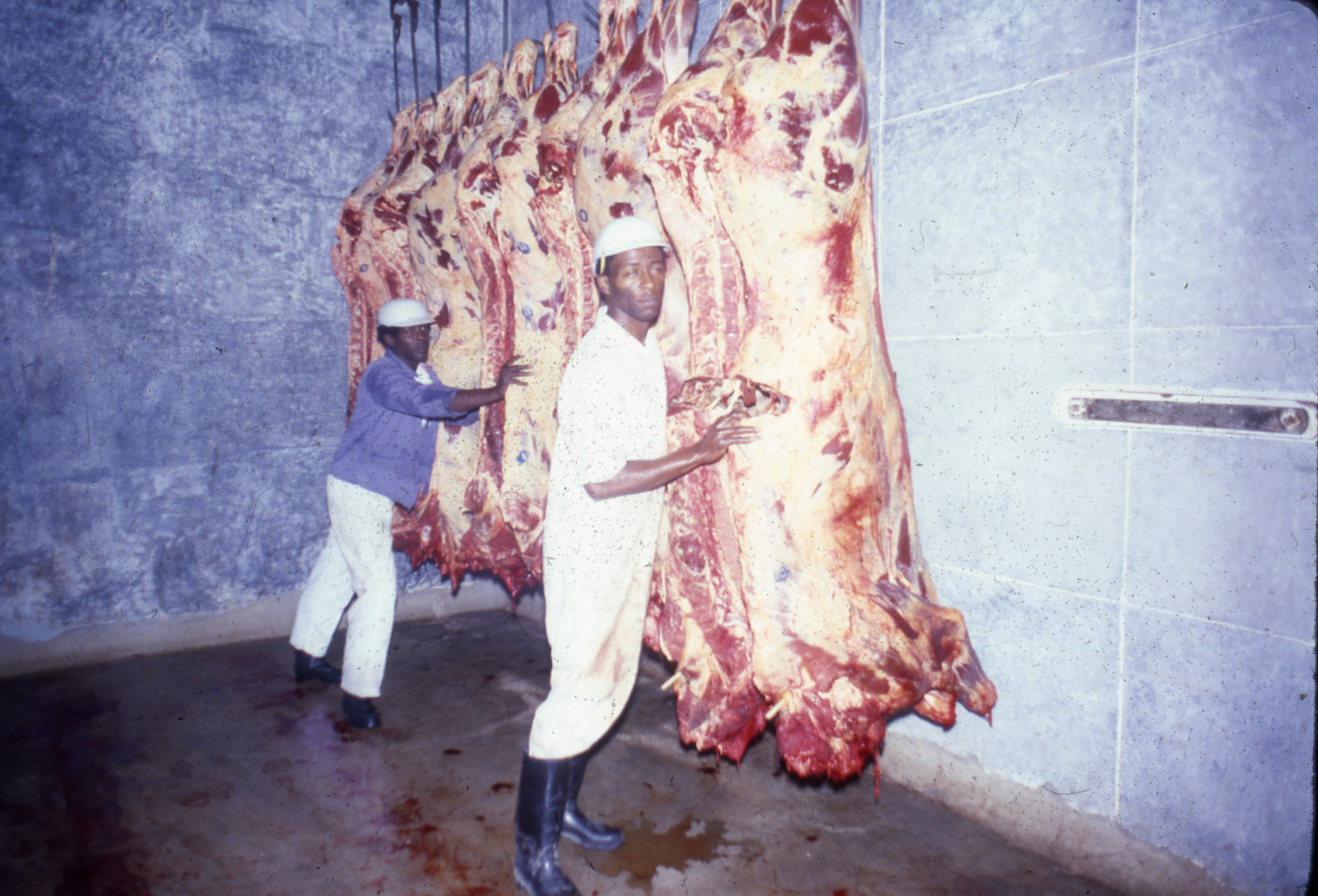 Manual labor characterized life in Florida prisons until the late 1980s. Prison staff, which was entirely white until 1971, assigned the most dangerous and difficult jobs to black prisoners. The men in this photo are slaughtering cattle at Florida State Prison, the previous name of which was "State Prison Farm." 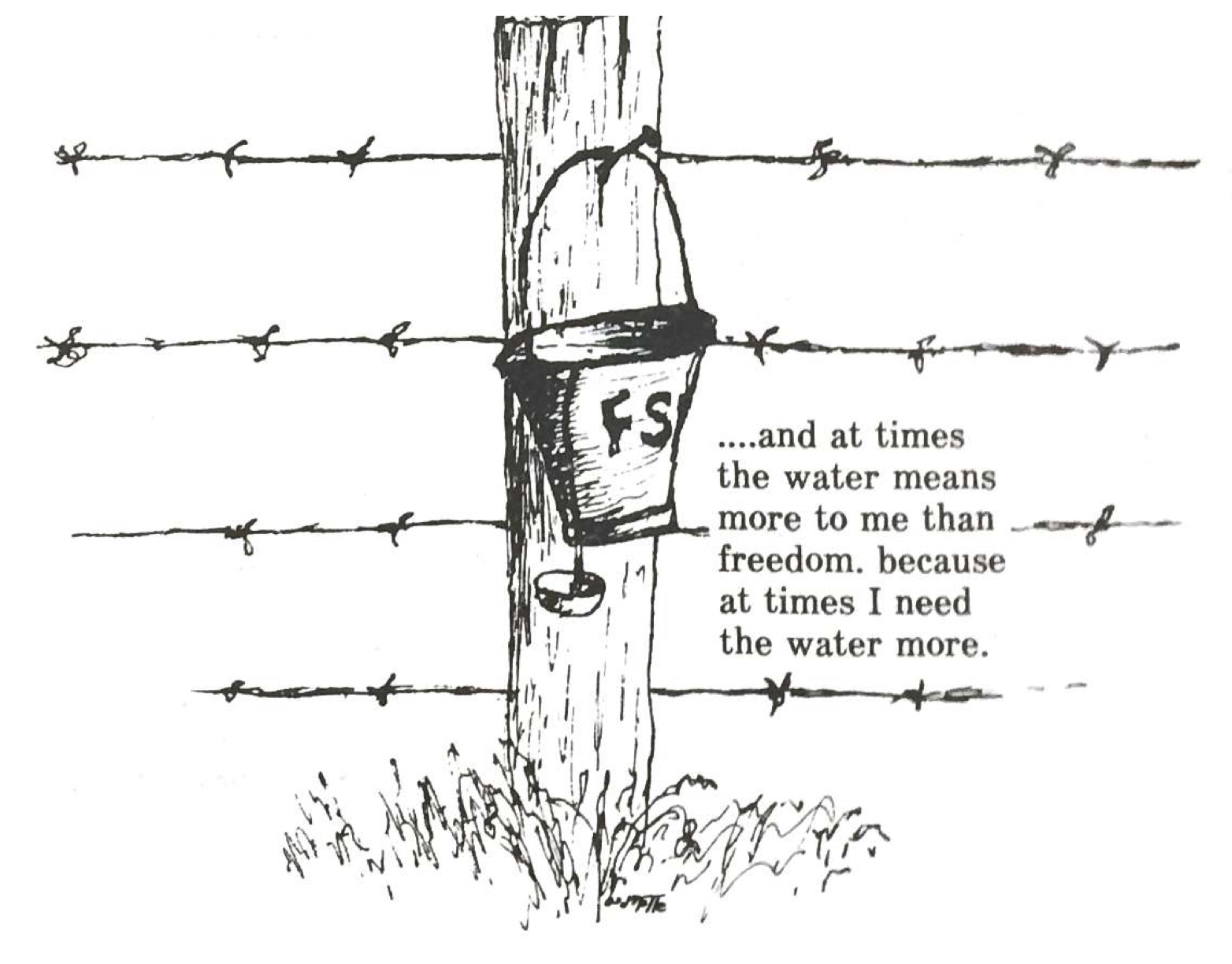 Thousands of Florida prisoners worked in hot fields and on scorching roads. Asking for water could sometimes result in severe beatings or solitary confinement in a "sweat box." This 1977 cartoon in Starke Reality II (Vol. 2, p. 26) lays bare the calculations prisoners could be forced to make when their human needs put them at risk of institutional punishment. Starke Reality II was a short-lived inmate newspaper that put out a few issues in the late 1970s. The newspaper takes its name from the town of Starke, Florida, where Florida State Prison is located. The small band of lawyers who defend Florida's capital cases joke that the town is "just down the road from Bleake." (The artist's name is illegible to me. If you think you can read it, please let me know!) 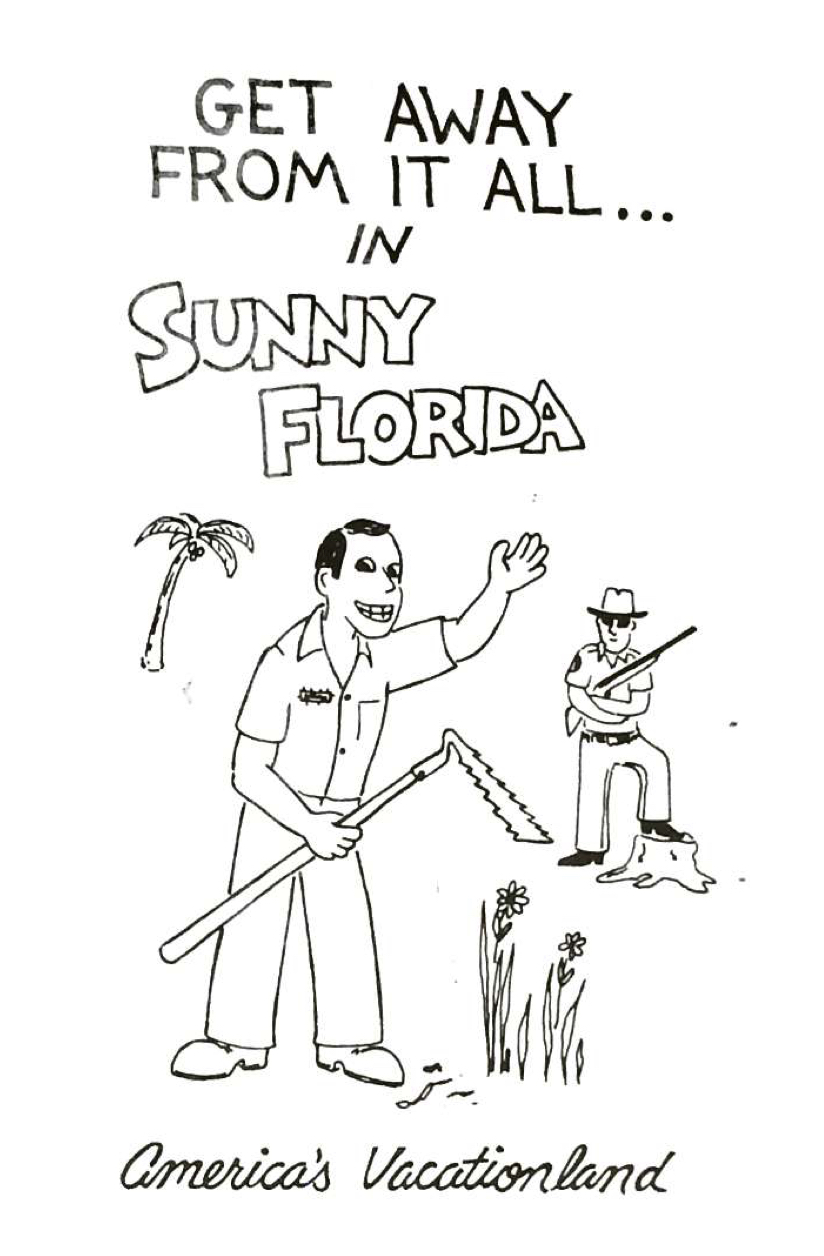 Many prisoners were aware that their experiences of forced labor were incongruous with the emerging idea of Florida as a sunshine paradise. This 1977 cartoon in the Starke Reality II (Vol. 2, p. 3) shows a prisoner working under armed guard. Beneath him are the words "America's Vacationland." During my ethnographic fieldwork, several prisoners suggested that I title my manuscript "From the Sunshine State to the Prison State." 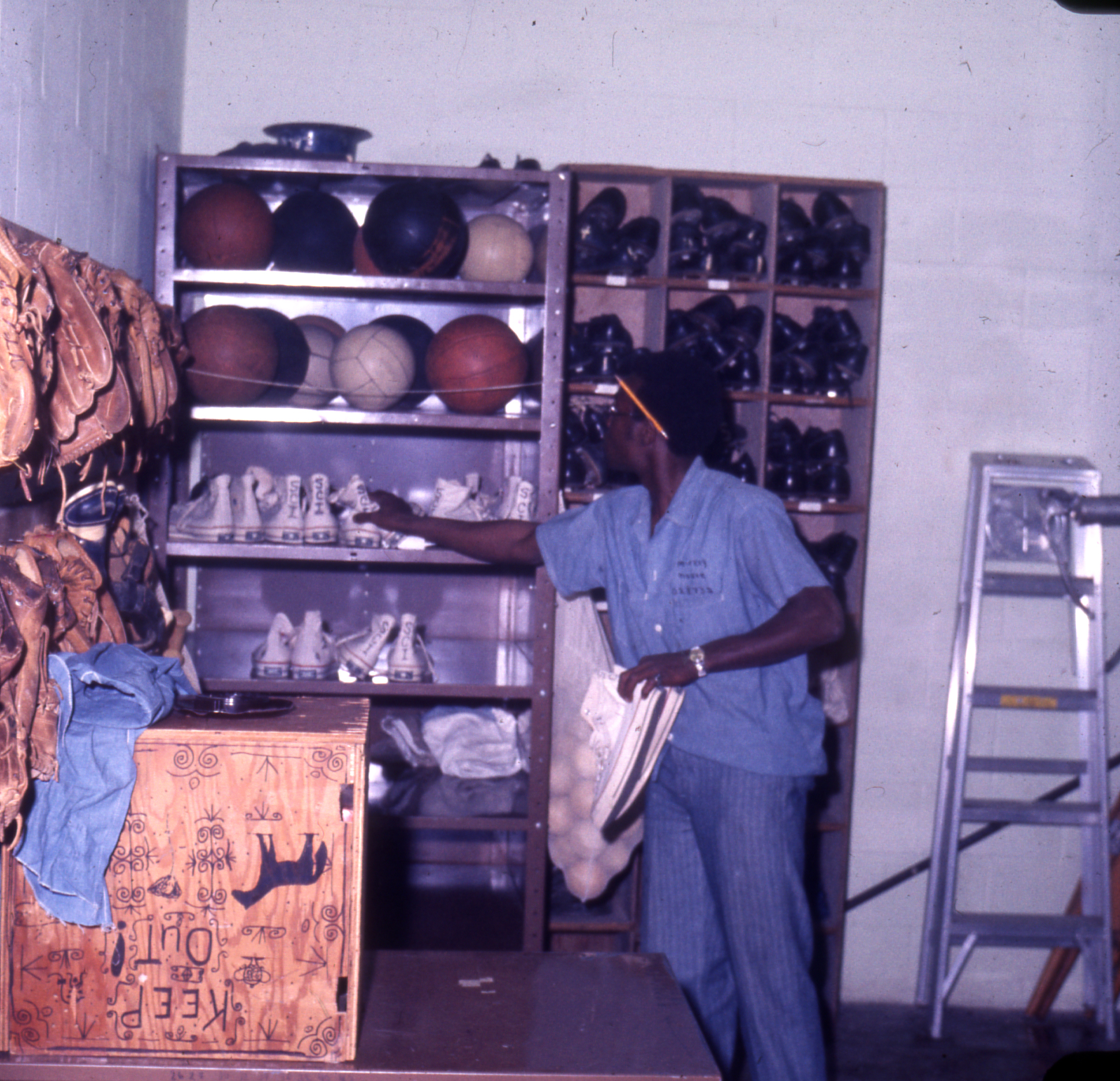 Football, boxing, and weight-lifting competitions were central aspects of life in Florida prisons from WWII until the early 1980s. This picture shows the equipment room at Florida State Prison. Baseball gloves, sneakers, and basketballs lined the walls. For the best analysis of sports in prison, see Ethan Blue's book Doing Time in the Depression, which has a chapter dedicated to sports, rehabilitative regimes, and mass culture. 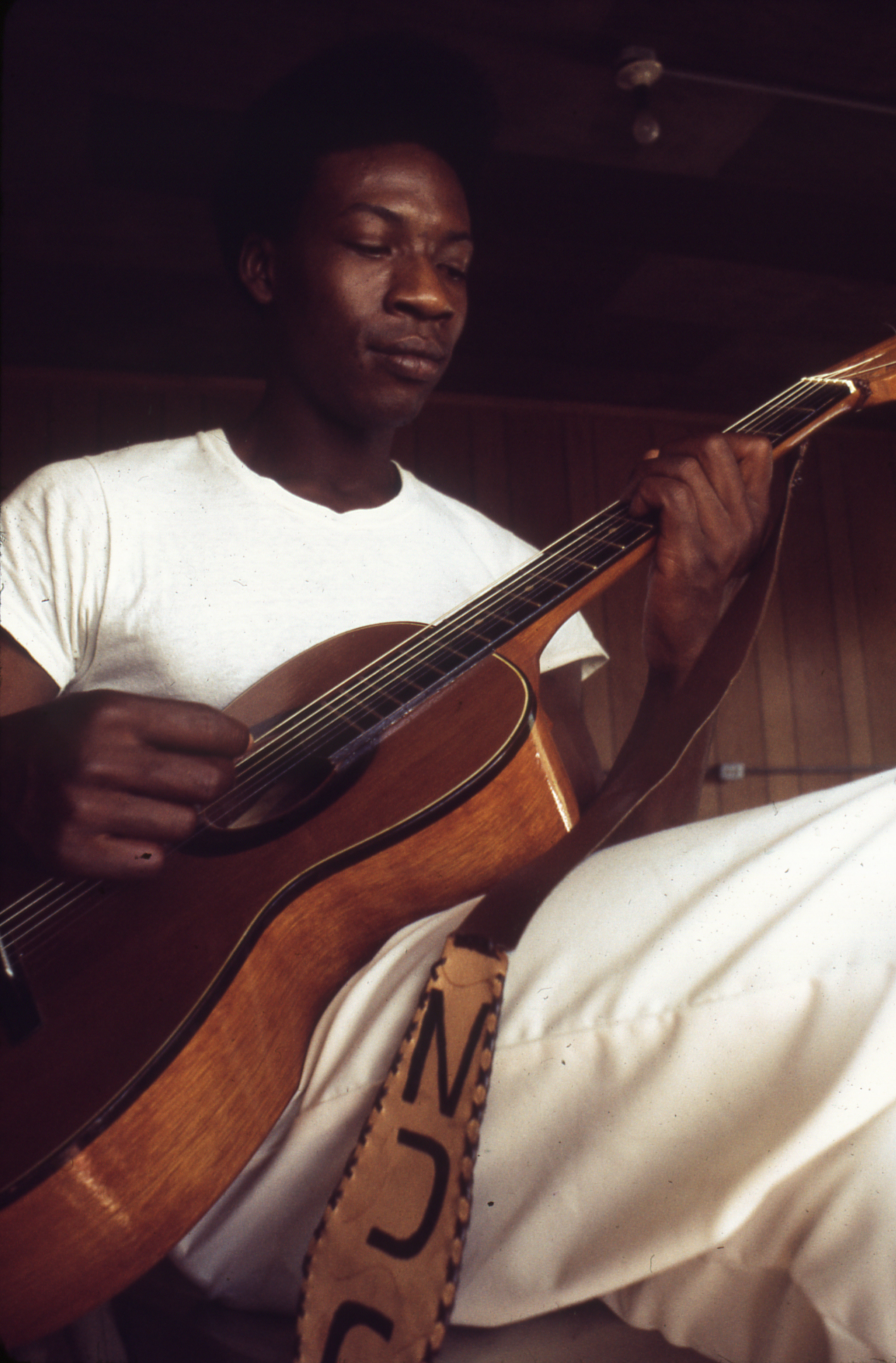 This is another picture from the State Archives of Florida that had no accompanying or identifying information. Until the 1980s, there were multiple opportunities for prisoners to play and perform music. Florida State Prison had several bands and the Florida School for Boys had an orchestra and marching bands. (For most of their existence, the bands--like the rest of the institution--were segregated.) 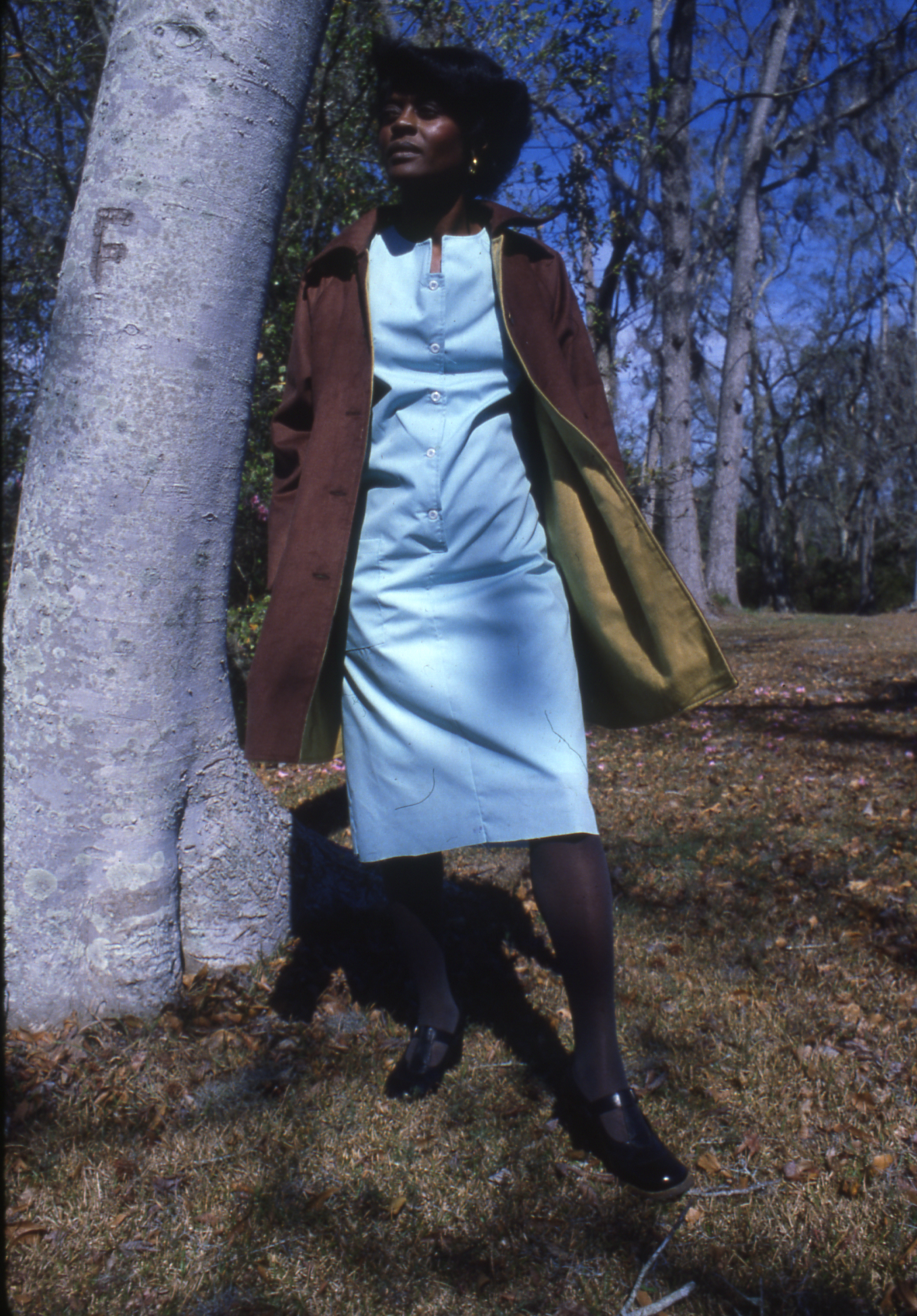 I found this picture in the archives with no explanation or location, but was probably taken near Florida Correctional Facility in Lowell, Florida. As prisoners of the Florida Department of Corrections, women were required to wear dresses and most worked in the garment shop, sewing uniforms for male prisoners, prison staff, and their fellow women prisoners. At the time this image was taken, the official song of FCI Lowell ("A Bridge over Troubled Waters") contained the lines, “Nothing is impossible when you put your trust in God/ Nothing is impossible when you’re trusting in His Word.” 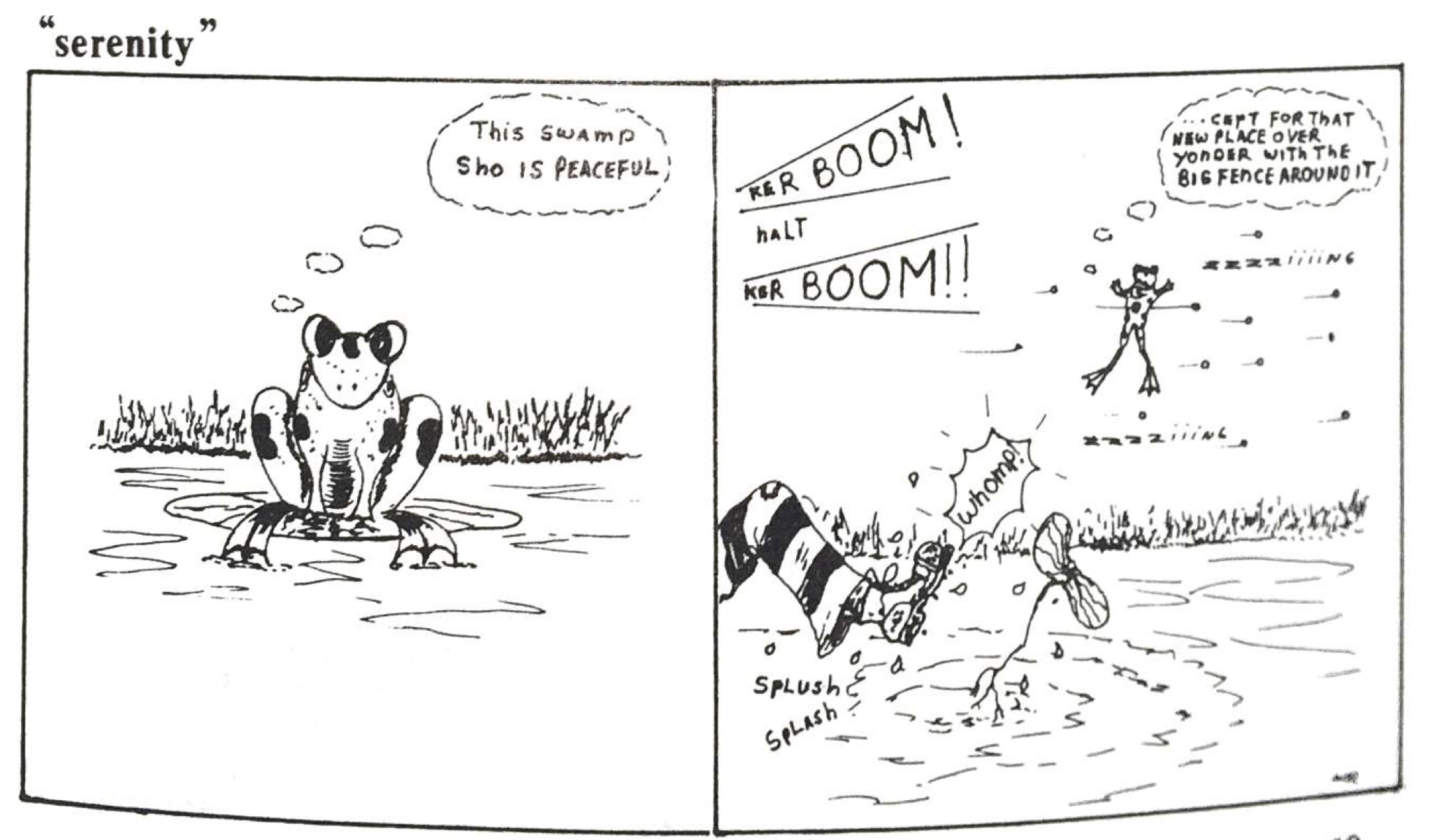 Florida prisons had a lot of "Troubled Waters" as most were built in or near swamps. Far from municipal infrastructures, providing clean drinking water and adequate sewage has always been a problem. During my ethnographic fieldwork in 2015 and 2016, prison staff would announce on what felt like a bi-weekly basis that it wasn't safe to drink the water. 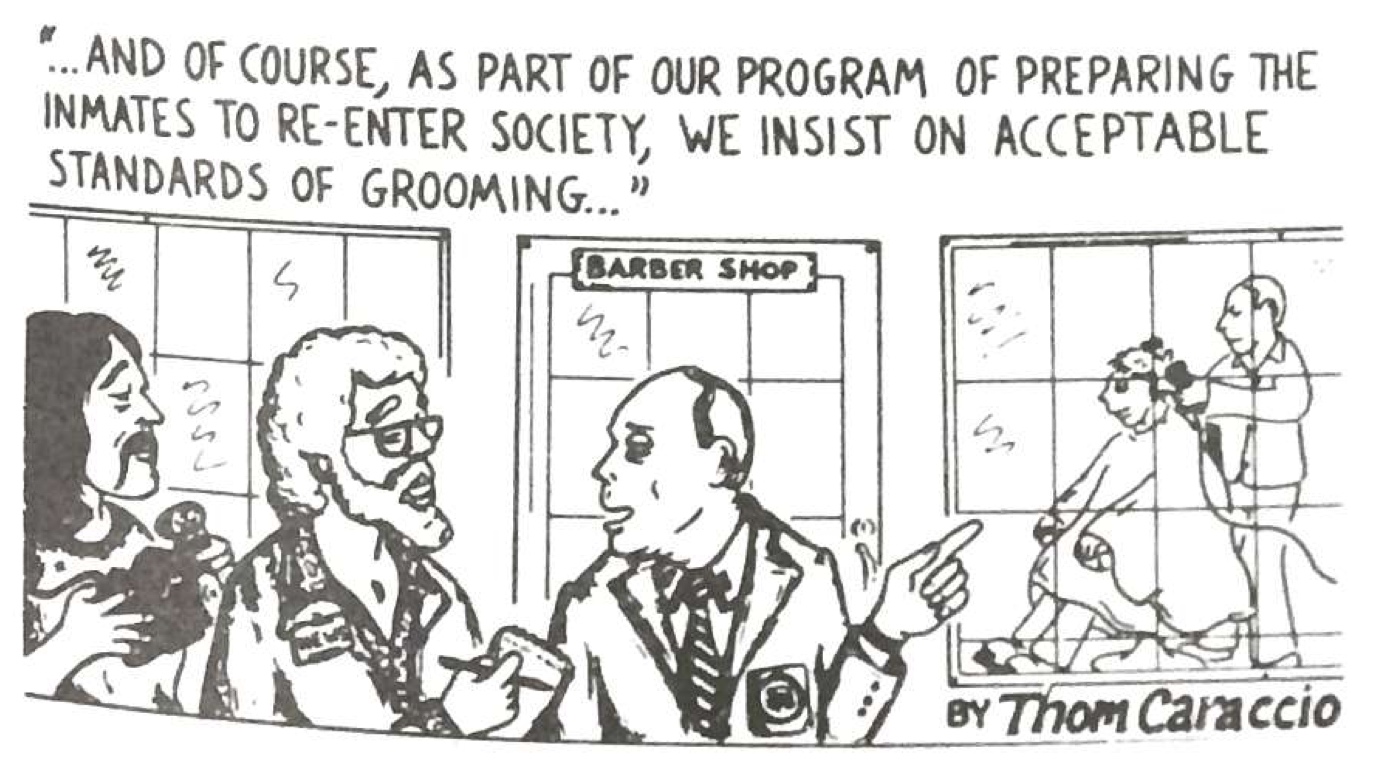 Facial hair has long been an issue of contention in Florida prisons. Until the 2015 U.S. Supreme Court decision in Holt v. Hobbs Florida prisoners were subject to solitary confinement if they refused to shave. I was conducting my fieldwork when the Supreme Court invalidated prohibitions on facial hair and, within a few weeks, it seemed that the majority of prisoners had beards. The warden still required prisoners to shave their necks because, according to prisoners I spoke with, he "didn't want [them] looking like winos." This 1977 cartoon from the Starke Reality II (Volume II, p. 11) mocks the prison system's antiquated idea that professionalization was incompatible with facial hair. 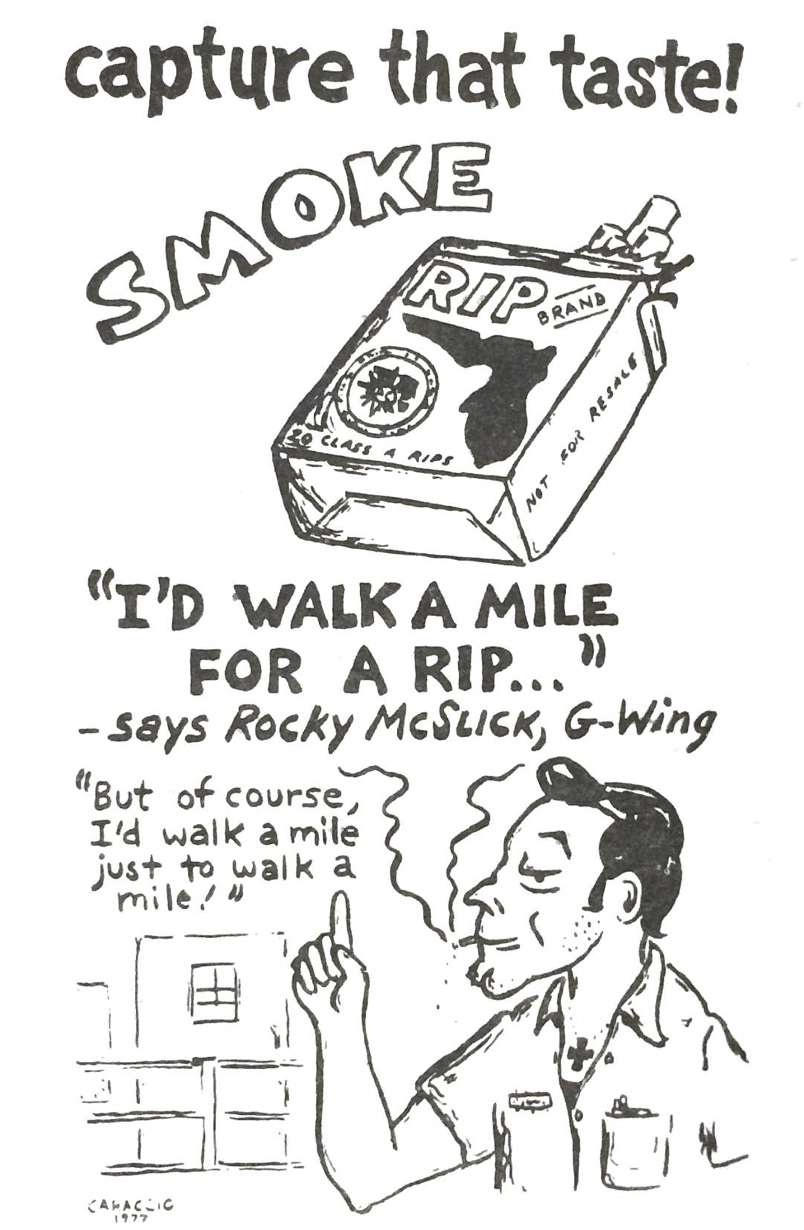 Among the most profitable of Florida's prison industries was its tobacco farm. Florida prisons produced cigarettes with the ominous branding "RIP." Several people who remember them told me that they had so much tar in them that after they had burned, "you could pick the whole ash up." Cigarette production stopped only when overcrowding became so severe in the early 1980s that the tobacco barns were converted into dormitories. The history of Florida's cigarette production continues to complicate the state's litigation (along with 45 other states) against U.S. tobacco producers. Given its captive consumers, RIP brand didn't need to advertise. This satirical 1977 cartoon advertisement by Thom Caraccio appeared in the Starke Reality II (Volume I, p. 9). 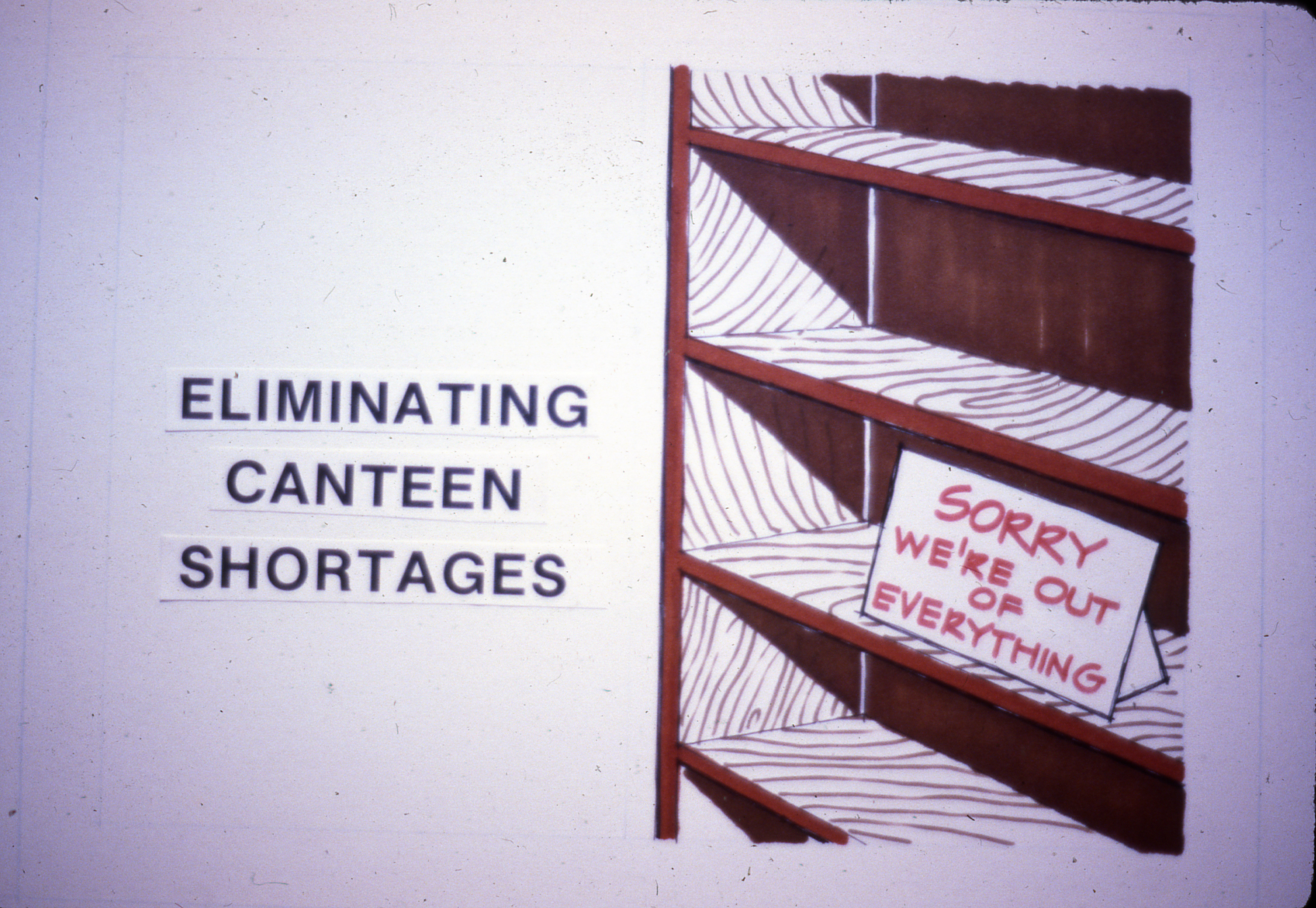 This slide from a ca. 1975 Florida Department of Corrections presentation reflects the degree to which corruption and canteen shortages became issues of public concern in the 1970s. The institutional canteen was (and remains) the only place where prisoners can buy supplemental food and necessities like toothbrushes, soap, and toiletries. Administrators regularly blamed prisoners for stealing from the canteen's stocks, but staff were responsible for the more significant thefts. In one instance, prison staff stole several hundred pounds of sugar destined for the prison cafeteria, which they planned to distill into homemade (and illegal) spirits. 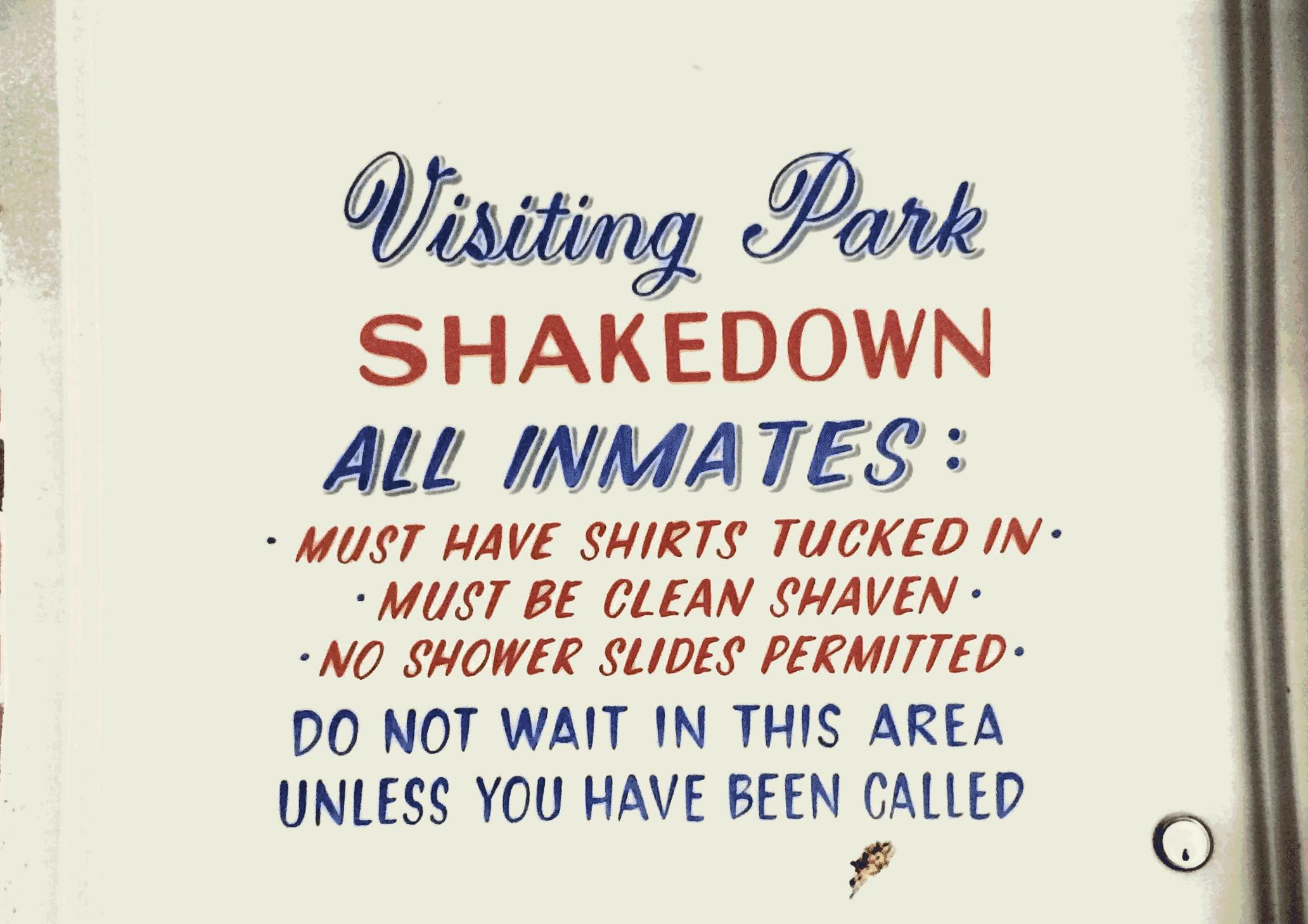 This is a picture of a sign leading to the Visitor's Park at the North Florida Reception and Medical Center in Lake Butler, Florida, ca. 1972. Prisoners endured strip searches before and after meeting their loved ones, who were also thoroughly searched. On Saturday mornings in 2015 and 2016, I often waited outside the main gate with families, many of whom had travelled great distances at great expense to see their loved ones. 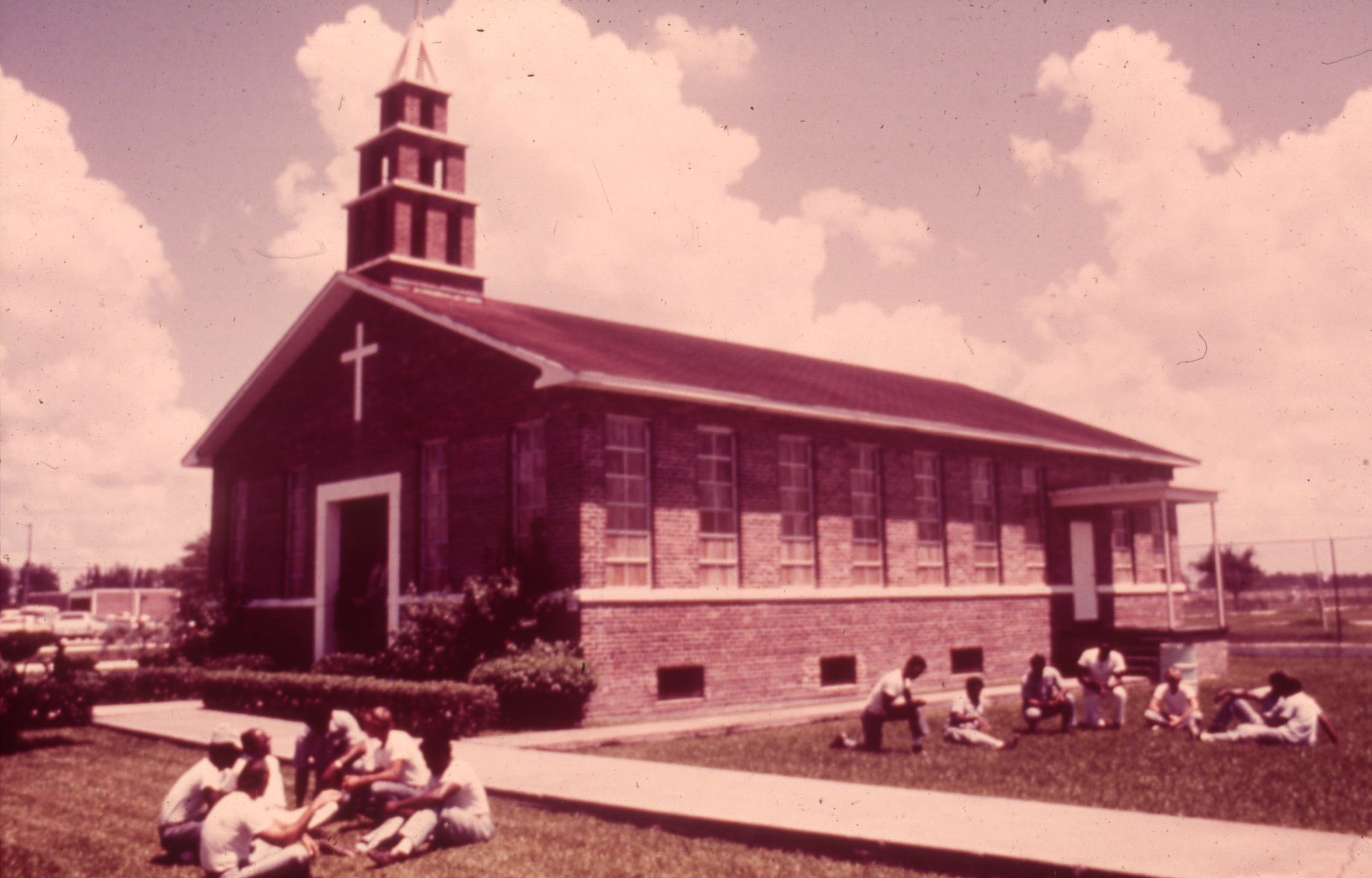 This is a picture of the prayer groups meeting outside the chapel at Glades Correctional Institution ca. 1979. Families were invited to attend Sunday services and, afterward, were permitted to walk around the facility's nearby orange groves. In her memoir about her husband's imprisonment and conversion to Christianity, Bunny Constantino jokes that "those were fertile groves" and writes her youngest daughter was conceived there. Prisoners whose families did not attend the Sunday service had no similar opportunities for private interactions.