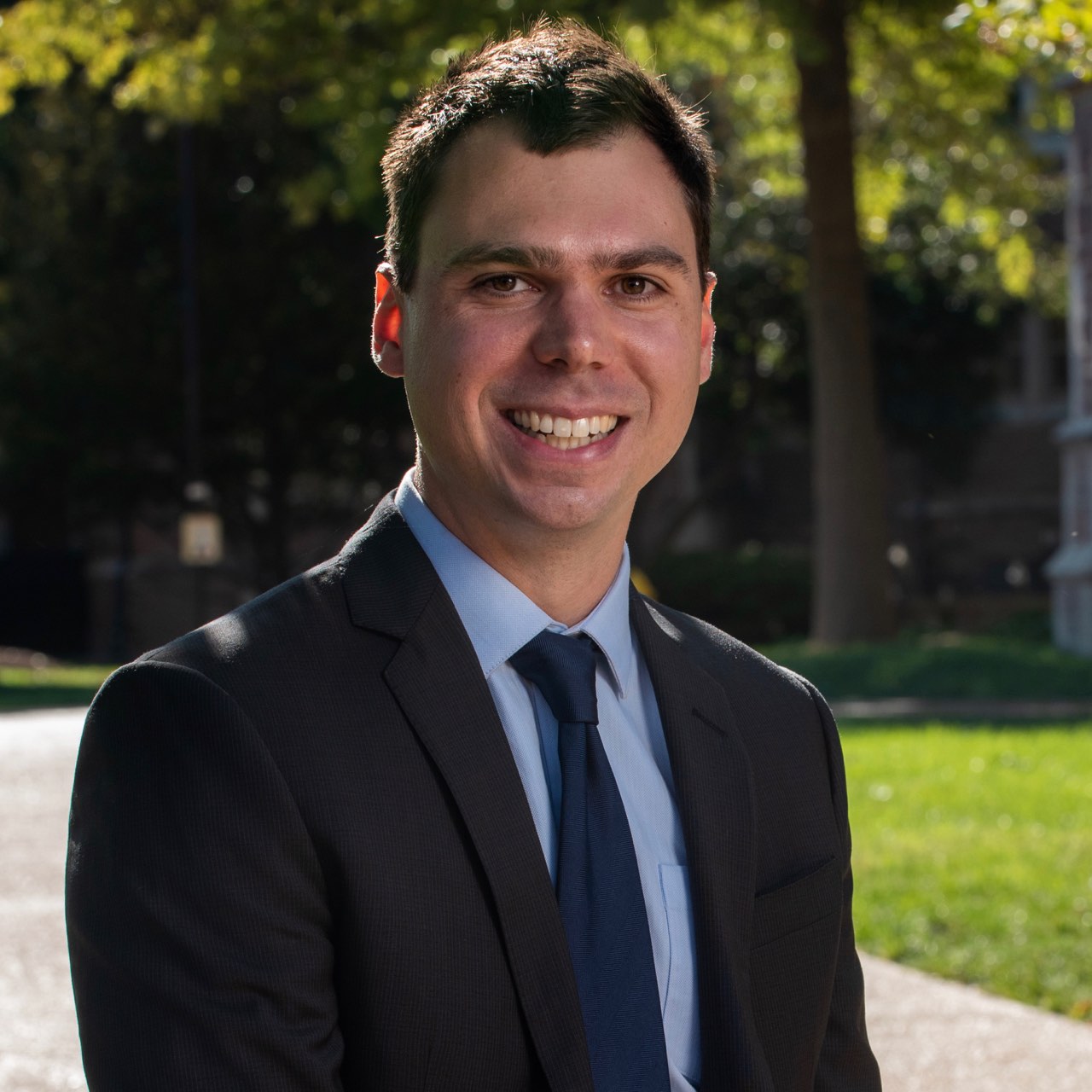 I am a researcher and advocate working against mass incarceration, militarized policing, and racial inequality. I am currently a Senior Research Associate at the Alliance for Safety and Justice. I was recently a Mellon/ACLS Public Fellow and a Research Fellow at the American Civil Liberties Union.

I earned a PhD in Anthropology and History from the University of Michigan, which awarded me its top dissertation prize, the ProQuest Distinguished Dissertation Award. I completed a postdoctoral fellowship at the Danforth Center for Religion and Politics at Washington University in St. Louis, where I taught about U.S. History, Race, Religion, and Politics.

The Journal of American History published my article, “‘A Prison in Your Community’: Halfway Houses and the Melding of Treatment and Control”, in its June 2021 issue.

Research in the Humanities and Social Sciences

I have extensive experience conducting research in and about prisons and related institutions. With funding from the National Science Foundation and the Wenner-Gren Foundation, I conducted thirteen months of ethnographic research in a 3,600-bed prison in North Florida. I have also led short-term research projects with people living in reentry centers, on probation, and on parole. My experience in and around contemporary criminal justice institutions is bolstered by my historical research of twentieth century correctional systems, especially “innovations” such as halfway houses, community corrections, and community policing. My interest is not merely to understand how institutional forms of treatment and punishment took shape, but also to highlight the experiences of the people who lived and worked within them.

My research has been supported by the National Science Foundation, the Wenner-Gren Foundation for Anthropological Research, the Rackham Graduate School at the University of Michigan, the Anti-Discrimination Center and the Charlotte Newcombe Foundation.

I have worked for more than a dozen years to reduce incarceration and promote justice. I worked for the American Civil Liberties Union, Southern Poverty Law Center, the Annie E. Casey Foundation, the American Bar Association, Restore Justice, and, from 2013 to 2020, the Project on Accountable Justice, a criminal justice reform think tank based at Florida State University. My projects to reduce incarceration have involved legislative advocacy, collaborative technical assistance to local courts and state corrections agencies, media campaigns, and assistance with litigation against a private juvenile prison. Some of this work has resulted in publications, a selection of which is below.

No Eviction without Representation: Evictions' Disproportionate Harms and the Promise of Right to Counsel

This report, co-branded by the American Civil Liberties Union and the National Coalition for a Civil Right to Counsel, summarizes existing reseach on the harms of eviction and how lawyers can help prevent and mitigate those harm. This report put the ACLU on record as supporting a civil right to counsel. 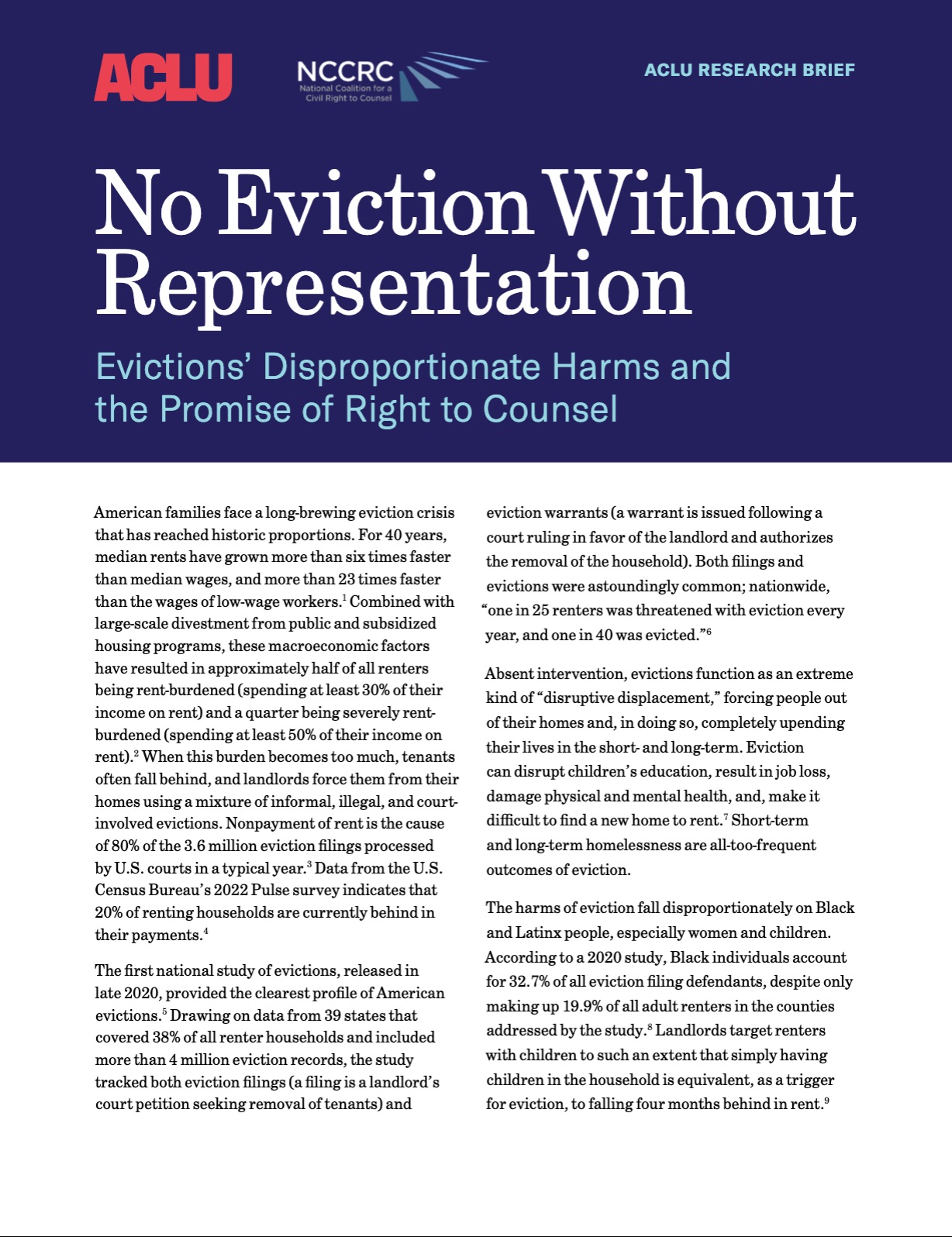 This article published on the ACLU's blog summarizes key findings from my Journal of American History article. Recast for a popular audience, it highlights the dangers posed by "alternatives to incarceration." Determining which alternatives will dismantle mass incarceration -- rather than replicate it -- involves close attention to technologies for involuntary confinement, surveillance, and control. 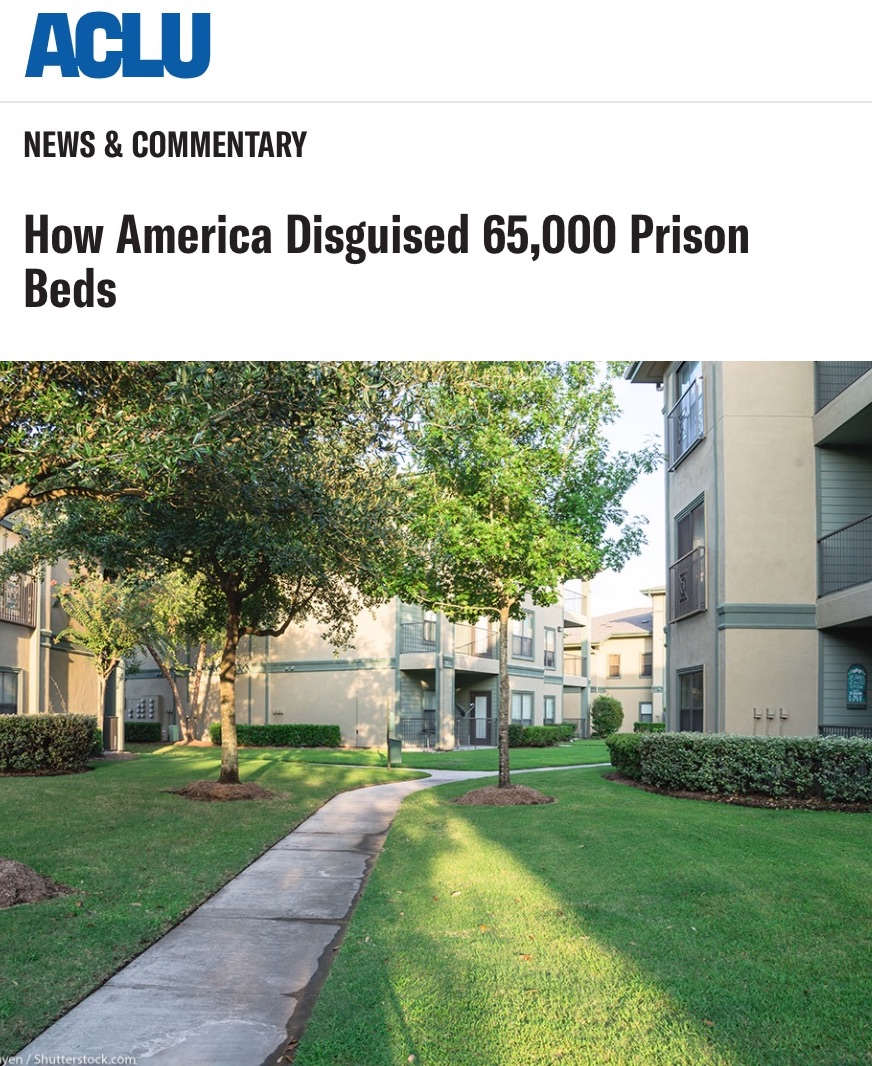 This piece is a collaboration with my brilliant colleague Charlotte Lawrence. We tracked transfers of military equipment to state and local law enforcement agencies under the 1033 program, and advocate for the repeal of 1033. We also propose that military equipment unsuitable for peaceful purposes be destroyed in environmentally friendly ways, such as being used in the creation and expansion of artificial reefs. 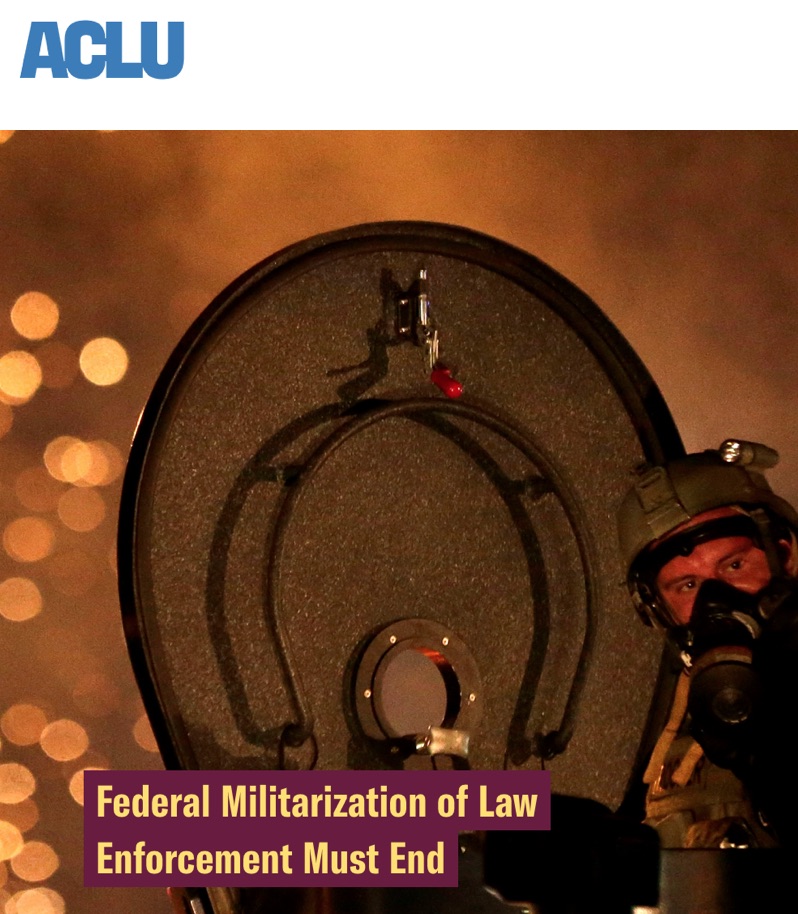 It's Past Time to End Federal Militarization of Police

This blog post is a companion piece to the longer article, Federal Militarization of Law Enforcement Must End. I wrote this for the ACLU's blog and it provides a pithy synopsis of my collaboration with Charlotte Lawrence, who conducted all the quantitative analyses for both pieces.

Prisons and jails quickly emerged as some of the most dangerous "hot spots" for the cornonavirus pandemic. Despite the risks crowded prisons pose to incarcerated people and broader public health, Illinois has not taken meaningful steps to keep Illinoisans safe. I worked with Restore Justice to analyze the release practices of the Illinois Department of Corrections in response to COVID-19. Though early releases are not sufficient to protect public health, they are rife with racial disparities and neglect the health and safety of black and Latino people. 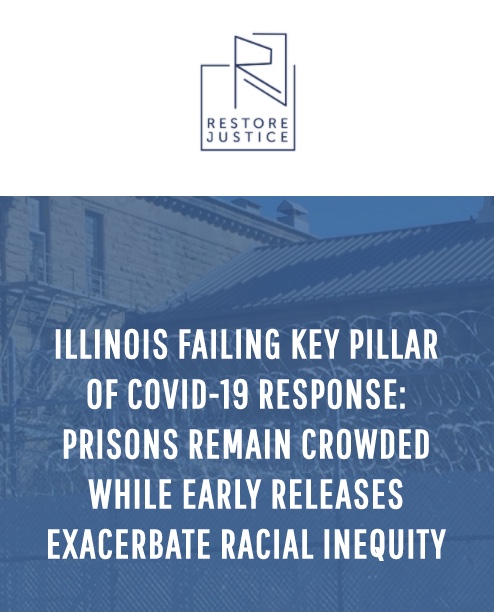 Nine thousand more Latinx people are imprisoned in Florida than previously reported because, for decades, Florida prison authorities have systematically misclassified Latinos as non-Hispanic whites. This report — highlighting both the systemic misclassification and the role of ethnic disparities in Florida's drug laws — drew significant coverage in the Mundo Hispanico, el Nuevo Herald and Agencia EFE, Spain's International News Agency and the 2th largest newswire service worldwide. Thank you to Ivonne Malaver for publicizing this and asking such crucial questions. 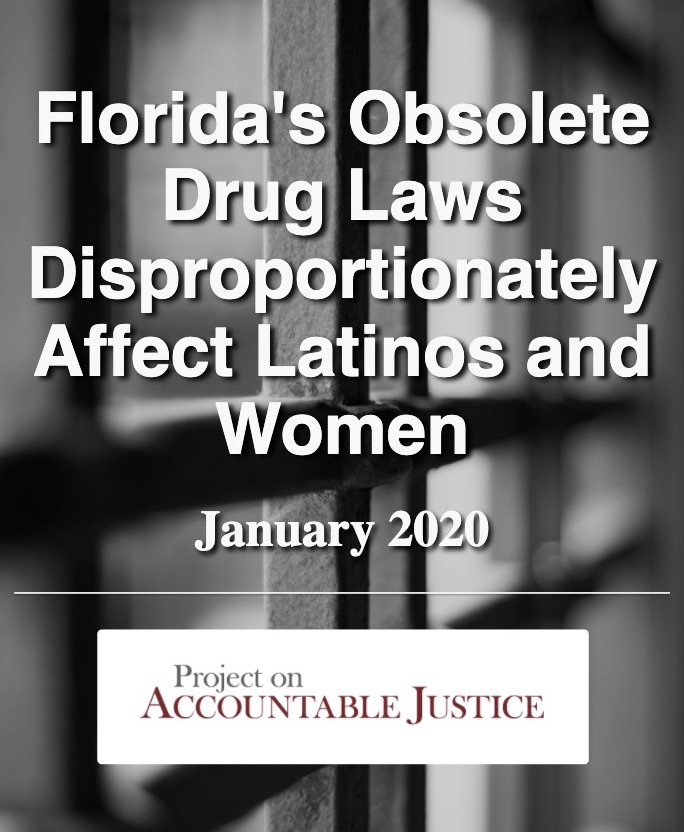 Florida Rolled Back Parts of the War on Drugs, but Hundreds Remain in Prison under Obsolete Laws. Justice Demands that Reforms Be Made Retroactive

This report highlights the plight of 935 Floridians who are serving mandatory minimum sentences for offenses that are no longer in state law. I collaborated with Emily Mahoney of the Miami Herald and Tampa Bay Times, which published a Special Report detailed the cases of people sentenced to up to 25 years in prison for simply possessing prescription opioids. 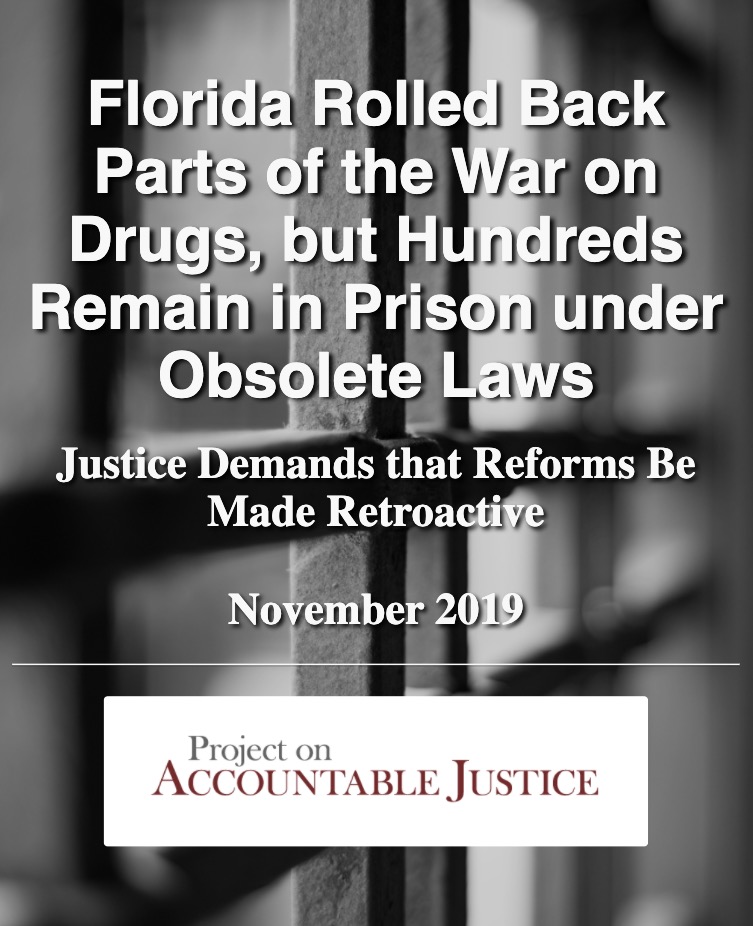 This report was released in November 2017 and includes detailed quantitative and historical analyses of Florida's criminal justice system. The growth of Florida's prison system has been both fast and steady. And even as legislators embraced laws and policies that grew the system, they were concerned about continued growth. Just since 2000, Florida's prison population has increased fifty percent, in large part due to laws that send tens of thousands of people to prison each your for minor offenses and other laws that keep people in prison for extremely long periods of time. Available here... 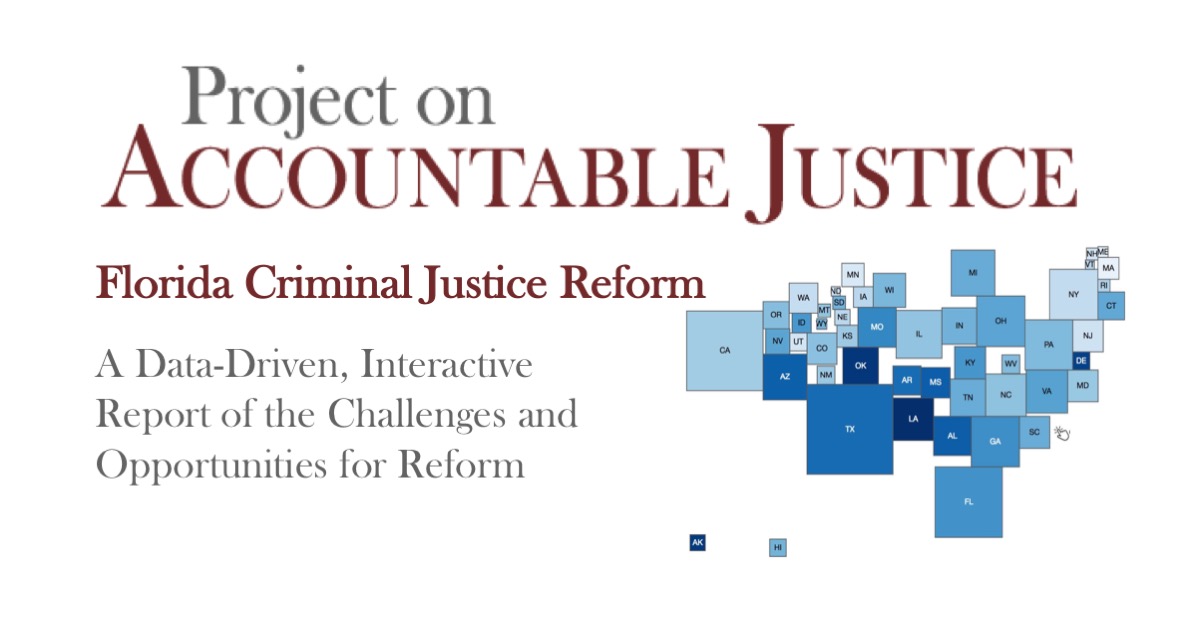 No Place for a Child: Direct File of Juveniles Comes at High Cost

I led a research team that analyzed quantitative data from multiple sources to find out what happened to children after they were transferred to adult court and prosecuted as adults. We found that 72% of children prosecuted as adults were not initially sentenced to prison, but instead were offered plea agreements to probation. The processes that allowed children to be prosecuted as adults produced significant racial disparities, violated basic norms of fairness, and resulted from an extreme concentration of power in the hands of prosecutors. Available as a PDF here... 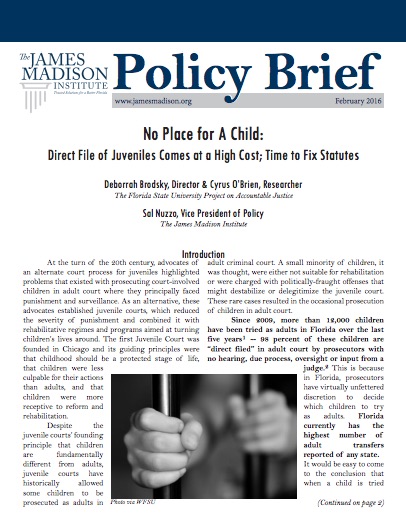 Unlocking Your Community's Hidden Strengths: A Guide to Community Asset-Mapping

This guide, to a process known as "community asset-mapping," rejects the habit of describing communities in which many of our children live by listing their problems. Instead of focusing on deficits, asset-mapping spotlights methods of tapping into the hidden wealth of knowledge in all communities for the benefit of children. Read the full document here... 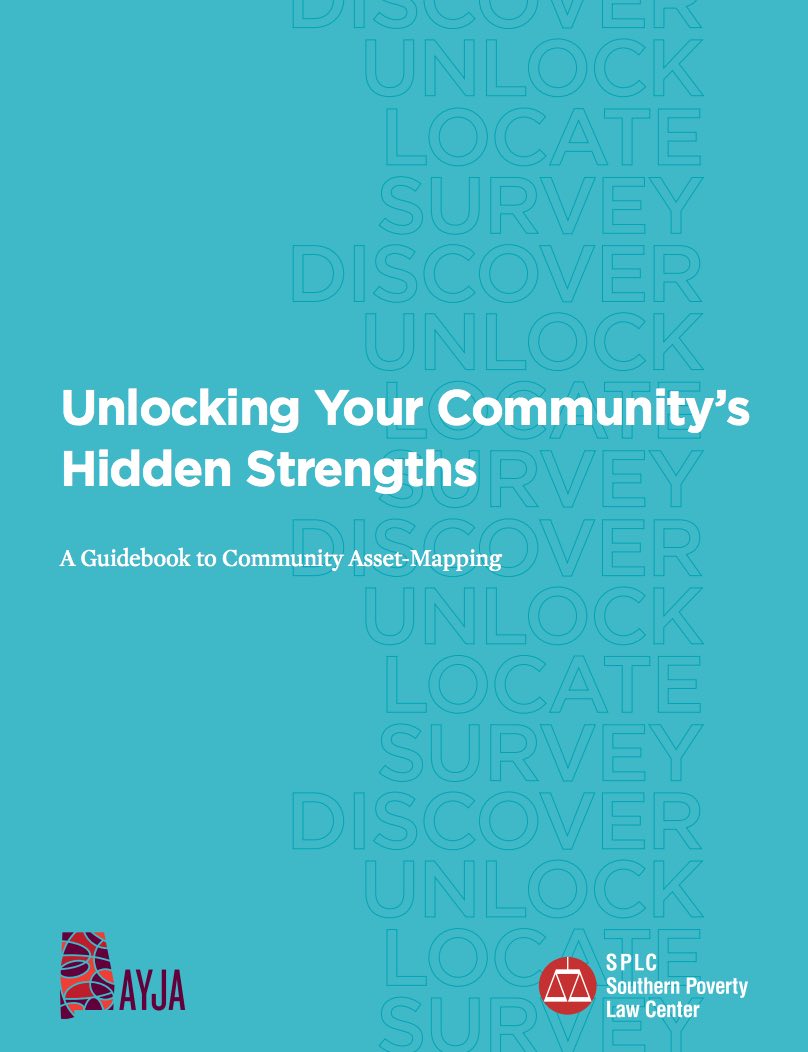 Fiscal Responsibility: The Key to a Safer, Stronger, and Smarter Juvenile Justice System

This white paper was based on a quantitative analysis of youth incarceration in Florida that found that nearly half of all children admitted to juvenile prisons were adjudicated only for a misdemeanor or probation violation. It was the basis for legislation that prohibited the incarceration of children adjudicated for misdemeanors in most circumstances, the implementation of which has contributed to a nearly 70% decline in juvenile incarceration in the state. Jointly published by the Southern Poverty Law Center and Florida TaxWatch, it was one of the first (and remains one of the few) successful anti-incarceration collaborations between right and left. I wasn't responsible for the title... Read the full document here... 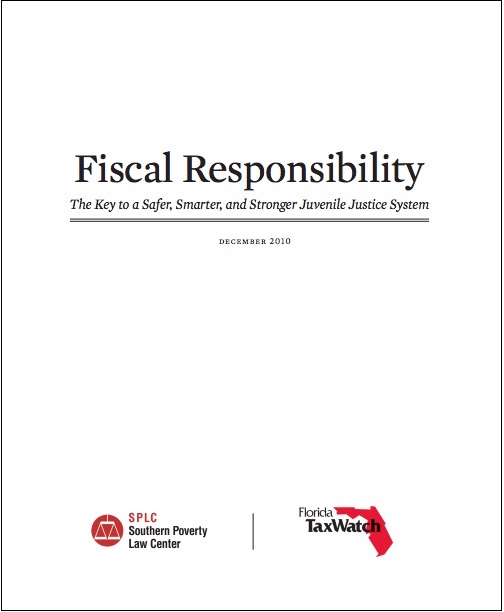